TELL US ABOUT YOUR CASE

We’re here to help answer your questions. Traffic offenses can be complicated, our team is on hand to help inform you of every aspect regarding your issue.

The town of Friendship NY is part of Allegany County in New York, United States. Originally, the town was called “Bloody Corners” and “Fightin’ Corner”. It was named so by the early settlers because of the alleged weekend fights. But then the finer citizens of the town took offense and went on to name the town after the opposite of the former name thus naming it officially ‘Friendship.’

Leaving their home and friends, they sought homes in the unknown wilderness of what is the present-day town of Friendship. The town is formed from a part of the Caneadea town but later, new towns were formed from the town including that of Cuba in 1822, Bolivar in 1825 and then a part of it for the town of Wirt in 1838. In the 1870s, a fire broke out that destroyed many of the village of Friendship’s original wood structures.

After that, the structures were replaced with brick building and during that time, the Hyde House Garden of the town of Friendship was also moved to the Genesee Country Museum. A number of structures in the town of Friendship were listed in the National Register of Historic Places such as the Wellman House in 1974 and the Friendship Free Library in 2008. It was only in 2015 when the town celebrated its bicentennial. Some of notable places and communities in Friendship is the hamlet Friendship in the center of the town, Higgins near the east town line, hamlet Nile near the south town line and Van Campen Creek flowing through town to the Genesee River.

Friendship Town court personnel are prohibited by law from providing you with any legal advice.  They will attempt to guide you through the process; but if you have legal concerns, you should seek the advice of counsel.

About The Nelson Law Firm
We help people fight traffic violations throughout New York state and have offices in Ellicottville, NY and in Cheektowaga, NY. We serve Cattaraugus County, Erie County, Allegany County and all other cities, towns and counties in New York State. If you need experienced representation, we are available 7 days a week to help you through your case.

New York Vehicle and Traffic Law section 1180 deals with speed limits and sets out the consequences imposed by a court upon a conviction. The fine that a court may assess is based on the specific traffic violation stated on the ticket, the ticketed speed, and the number of previous convictions.

Some of the most common violations under the DMV point system:

Did you receive a ticket in Friendship Town court?

It is not uncommon for an individual to attempt to defend a traffic violation by themselves without knowing the procedure and customs of the local court system. However, oftentimes a person who represents themselves risks missing important deadlines, notices, and court proceedings because they are not familiar with the court rules and legal documents involved in any given case. Without an understanding of local courtroom rules and customs, people that choose to represent themselves, due to their lack of knowledge of these rules and customs, often, unintentionally offend a judge or district attorney.

QUESTIONS ABOUT A TRAFFIC OFFENSE?

We help people throughout New York state and have offices in Ellicottville, NY (Cattaraugus County) and Cheektowaga, NY (Erie County). We serve Cattaraugus County, Erie County, Allegany County and Chautauqua County and all other cities and counties in the state of New York. If you need to fight your charges with experienced representation, contact The Nelson Law Firm today. 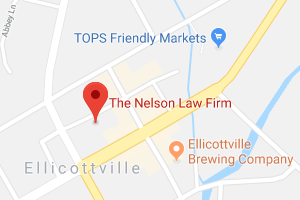